I was one of those fortunate girls.

I loved my Dad and he loved me. Don’t get me wrong- he loved all of us, but Dad and I were buddies. My brothers weren’t really into actively following sports, so he was happy when he found a willing disciple in me. We spent a lot of good times together. At the bottom of this blog post, I have a picture of Dad in the car when we were at Penn State for a game.

It’s seventeen years ago today that I lost my Dad. I remember,in many of our talks, how he would tell me about life after he would be gone. I believed him and always kept it in my head. You only have one Dad and no amount of time can replace the hole left behind in your heart when he leaves.He didn’t tell me that, but it’s what I learned.

Miss you terribly,Dad, and will love you forever. Kiss Mom for me.

So greetings from Undisclosed, where we are currently on computers while the TV has the Phillies game on.

…broadcast via cable from a local station…

..you would think it was coming from MARS!

It is really annoying, as the TV is annoyingly chopping every third..out of…and you have to ..to catch what you thought went down.

It has crossed my mind to put a satellite dish around Kasia net, as it might help with the reception.
Funny, we never had this issue before from Comcast, er, Xfinity, er, whoever. 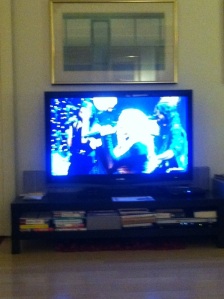