This is a partial review of the bar/casual restaurant “The Ugly Mug” in Cape May, New Jersey. 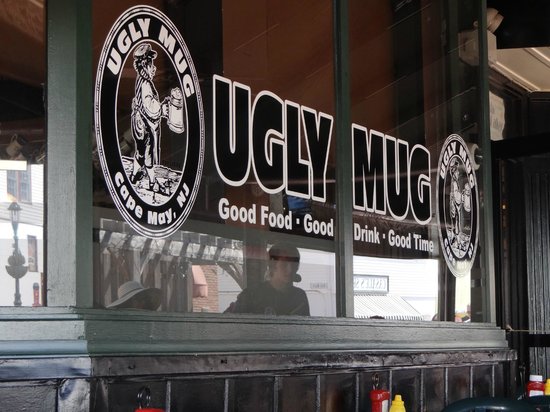 Jim and I have been there once in a while. I mean, we live in a resort area and there’s a lot of places to eat, and usually, it’s just Jim and I when we choose to eat here. As we live here year round, we usually stop by in the off-season,

Last night was one of those nights.

We decided to catch some dinner there. Zush was kind of quiet so we figured we could go out for a little while and act like regular people…haha!

Our first mistake was going in and sitting in a booth and Jim had no glasses with him.The light over the table was very low-wattage, so he had to go outside to actually try to figure out what was on the menu. When he came back in, we both noticed that it was unusual that sandwiches and burgers seemed to cost $14.99 each.Aged beef burgers, regular burgers, both were $14.99. Deli sandwiches, such as my open-faced hot pastrami, was $14.99, with the disclaimer that they got the luncheon meat from the Carnegie Deli in New York City. Ok, well, I have been there, and figured that’s how they figured out the price for that. Jim had a turkey club sandwich that had a generous portion of meat: I don’t know if the turkey came from New York also, but it too was $14.99.

Believe it or not, this wasn’t the issue.

Our waitress was more interested in waiting on a table of seven twenty something girls seated right by us. God bless the cook, who smiled as he brought out our sandwiches.He chatted with us and was rather pleasant. The waitress, three minutes later, breezed by asking if everything was ok. Uh,we told the cook that, and oh, how nice of you to ask us that, as if to solidify a tip. As we were almost through the meal, the cook had been walking by again, and I asked if he could please bring me a container so I can bring the remnants of my sandwich home. Smiling he assured me he would and, smiling, he did.

Then came the fun.

The waitress came with our bill, and said she would come back for it. Jim had a $50 bill and put it out to pay for our meal. The girl came back and asked if we wanted change. Hmmm, you fly by us and expect us to leave you a $14.99 tip? Why yes, we would like our change.

The change came back to the table and something was not right. Dollar bills and a five dollar bill came back, but no actual change! I said to Jim that we were short-changed, but by that time, we were so aggravated, we got up to leave.

As we walked out, and yes, we did leave a tip, I asked the young man at the outside hostess station what was the name of our waitress. He asked me if there was something wrong, and we said yes, and proceeded to tell him about our change. Then we were floored. The young man informed us that the wait staff doesn’t “handle” coins/change. I was told their”policy” was either to round-up or lower the amount so they didn’t have to worry about coinage.

There is a bar in the dining area with a few cash registers in there. They can’t handle coin? Not everyone pays with credit card, and not everyone is a tourist, Some locals eat here, or used to. We are retired or semi-retired and watching our finances. To be told a policy was in effect and to not have seen it in print on the menu, well, to say we learned something is an understatement.

It’s nice to have a large tourist influx to keep your business afloat.They will probably enjoy the experience. I know that, as locals, we did on the previous times we had been there.

Tourist trade slows down. Locals live here every single day. Not all of us go out to eat on a nightly basis, but we have wallets and would like to have our bills settled with accurate change, be it dollar bills or quarters. We worked for our money. We don’t appreciate you round down or up for your convenience with no notification. Something like this will have us round down our opinion of your restaurant.