Any Kevin Costner movie that is sports oriented,be it For Love of the Game, Draft Day,Bull Durham…I have been watching a few and noticed one thing, er,rather,a few.

Are the plots kind of similar?Player or team in trouble and Costner comes in to save the day.Costner having the worst day of his life? Incredible how he turns it around to pitch a no hitter.The musical scores sound awfully similar.Same crescendos of music at integral plot twists, and there actually was a moment today when I wondered if someone in Costner’s family wrote one score and gets residuals every time it gets used.He gets at odds at some point of the plot with his romantic lead, and incredibly, everything is peaches and creme by the end of the movie.

Maybe he was making up for his cutting room floor scene at the beginning of The Big Chill, where all you saw was Costner’s wrist sewn up in a dapper suit for his funeral…I can’t pretend to know, and really, I’m just noticing stuff. I love Kevin Costner.Really. I do.But maybe someday he’ll throw me for a loop and put something different in the plot to see if I am paying attention. 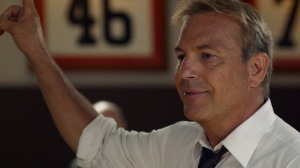